He said, she said… what did God say? 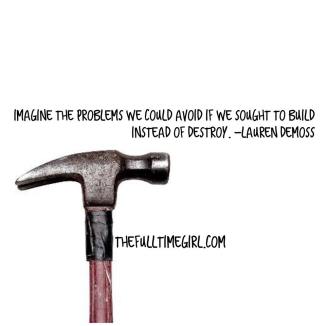 Honestly, it is viewed as one of the “harmless” sins. Victimless almost, but that’s not what the Bible says. Sin is never victimless, and it surely is never harmless. To really grow closer to God, and to really live a life like Jesus, we need to learn to, first, recognize the different types of gossip, and, second, what the Bible says about them, and then get serious about getting rid of gossip in our lives.

Defined as “the action or crime of making a false spoken statement damaging to a person’s reputation. make false and damaging statements about someone.”

Basically telling a blatant lie about someone. Spreading rumors that you know are untrue. Mudslinging.

What does the Bible say about slander?

But now ye also put off all these; anger, wrath, malice, blasphemy, filthy communication out of your mouth. Colossians 3:8

Defined as “spreading gossip or scandal.”

You heard something, you don’t know if it’s true or not, but you pass it along just in case. It’s really none of your business, but you make it your business. You keep the gossip alive by spreading it like a virus. Maybe you add your own twist-a little embellishment to make it a little wilder, and it continues to damage those whom it’s about.

What does the Bible say about dishing the dirt?

He that goeth about as a talebearer revealeth secrets: therefore meddle not with him that flattereth with his lips. Proverbs 20:19

Grudge not one against another, brethren, lest ye be condemned: behold, the judge standeth before the door. James 5:9

He that keepeth his mouth keepeth his life: but he that openeth wide his lips shall have destruction. Proverbs 13:3

Defined as “scrambling for the most recent information about someone or something, especially something personal or private.”

You heard a bit of juicy info, and you want to know more. You ask someone else who might have more information instead of going to the person who it is about. Asking someone else to gossip- directly or indirectly- and lending your ear to gossip makes you just as guilty as the one whose lips are moving.

What does the Bible say about getting the scoop?

He that passeth by, and meddleth with strife belonging not to him, is like one that taketh a dog by the ears. Proverbs 26:17

Defined as “malicious talk about someone who is not present.”

You can’t stand this person… their personality, their hair, the way they walk, the way they gave you that dirty look that one time. So you decide to talk badly about them. They are not there and, therefore, can do nothing to defend themselves. You force whoever is listening to be the judge and jury. They have to make a judgement by hearing only one side of the story. They only get your version of the “truth.”

What does the Bible say about backbiting?

Whoso privily slandereth his neighbour, him will I cut off: him that hath an high look and a proud heart will not I suffer. Psalm 101:5

Defined as “teasing and contemptuous language or behavior directed at a particular person or thing.”

The Bible says, “Fools make a mock at sin” referring to people who joke and laugh about sinful situations. However, it can be another gossiping tool. These are sarcastic comments, jokes, that take some sort of truth and turn it into a joke to say-but not really say- what you want to say about others when they are not around. These jokes make others question people’s character even though you lead them to draw their own conclusions. It is another passive way to damage someone’s reputation and spread more gossip. Another word for mockery is “scorning” and the Bible has plenty to say about the scorner.

What does the Bible say about mockery?

Proud and haughty scorner is his name, who dealeth in proud wrath. Proverbs 21:24

Reprove not a scorner, lest he hate thee: rebuke a wise man, and he will love thee. Proverbs 9:8

Cast out the scorner, and contention shall go out; yea, strife and reproach shall cease. Proverbs 22:10

Blessed is the man that walketh not in the counsel of the ungodly, nor standeth in the way of sinners, nor sitteth in the seat of the scornful. Psalm 1:1

Defined as “planting seeds of bitterness, anger, distrust, and hatred into the ground of other people’s hearts”

This type of gossip is the most passive and “innocent” looking. It is said in such a way to to plant a seed of doubt, and allow the hearer to come to a negative conclusion about someone else. It makes them question their character by planting tiny comments about them or what they might or might not be doing. For example, “Will you tell me if so-and-so says anything about me?” or “It is interesting how they are spending so much time alone in the office with the boss.” or “It’s weird how she keeps looking at your boyfriend when you’re not looking.”

What does the Bible say about sowers of discord?

A naughty person, a wicked man, walketh with a froward mouth. He winketh with his eyes, he speaketh with his feet, he teacheth with his fingers; Frowardness is in his heart, he deviseth mischief continually; he soweth discord. Therefore shall his calamity come suddenly; suddenly shall he be broken without remedy. These six things doth the Lord hate: yea, seven are an abomination unto him: A proud look, a lying tongue, and hands that shed innocent blood, An heart that deviseth wicked imaginations, feet that be swift in running to mischief, A false witness that speaketh lies, and he that soweth discord among brethren. Proverbs 6:12-19

Now I beseech you, brethren, mark them which cause divisions and offences contrary to the doctrine which ye have learned; and avoid them. For they that are such serve not our Lord Jesus Christ, but their own belly; and by good words and fair speeches deceive the hearts of the simple. Romans 16:17-18

These are a few examples of gossip that you might recognize. Here is the question…. How do we stop gossip?

Proverbs 26:20 tells us, “Where no wood is, there the fire goeth out: so where there is no talebearer, the strife ceaseth.”

When a rumor doesn’t have anywhere to go, it disappears. If you refuse to listen to gossip, and you refuse to spread gossip, then you will have stopped gossip. Simple as that.

James 3:5 says, “Even so the tongue is a little member, and boasteth great things. Behold, how great a matter a little fire kindleth!”  We really need to start taking gossip more seriously in our lives. Gossip can do so much damage! And not only to those we speak about. To ourselves! We make enemies, destroy our brothers and sisters in Christ, ruin our testimonies, and block the blessings of God when we choose to participate in gossip of any kind.

If someone comes to you with gossip, stop them immediately, and bring that person directly to the one about whom they are speaking. If they will not come, then you tell them that you are going directly to that person, and tell them what they are saying so that they can make it right. I guarantee you that people will stop coming to you with their gossip, seeds of discord, and whispered mockery if you immediately go to the person involved.

Christians, imagine the blessings we could enjoy, the love we could share, the fellowship we could have, and the problems we could avoid if we sought to build instead of destroy. Imagine how strong we could be for the cause of Christ if that was exactly who we were focused on…. CHRIST!

We can not let the Lord down any longer in this area.

And let the peace of God rule in your hearts, to the which also ye are called in one body; and be ye thankful. Let the word of Christ dwell in you richly in all wisdom; teaching and admonishing one another in psalms and hymns and spiritual songs, singing with grace in your hearts to the Lord. Colossians 3:15-16

Hey there, it’s me. I’m so glad you found my site. Feel free to browse around. I can’t guarantee everything on here is just for you, but it is my heart poured out on topics that are very close to me. So take what you need and maybe pass it on to a friend… we need each other in this crazy life and all the help we can get.