Purity and the Jesus Standard. 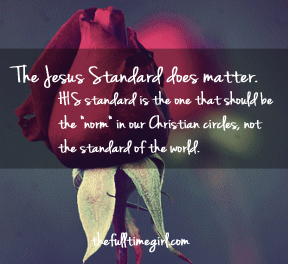 Marriage is honourable in all, and the bed undefiled: but whoremongers and adulterers God will judge. Hebrews 13:4

God’s standard is purity-whole purity. We, as his children are told to remain sexually pure until marriage, and for good reasons.

These are some frightening statistics about sexual activity in today’s society:

•    Sexually active people are four times more likely to contract a sexually transmitted disease (STD) than to become pregnant.
•    Three million teenagers contract STDs annually.
•    25 million Americans are infected with the herpes virus.
•    More than 40 percent of sexually active singles are infected with human papillomavirus (HPV), commonly called genital warts.
•    One in every 250 Americans has the AIDS virus.
•    An estimated one in five Americans is infected with a viral STD, a figure that doesn’t include bacterial diseases like chlamydia, syphilis and gonorrhea.

As opposed to the 1950s when there were only five sexually transmitted diseases that were known and treated, there are more than fifty types of STD’s today. Chlamydia is the number one STD among teens today. There are about 4,000 teenagers every day who contract chlamydia. This is a bacteria, not a virus.

Unlike some venereal diseases, it can be cured; however, 90% of those with Chlamydia have no symptoms. You can not treat a disease you don’t know you have. If you contract chlamydia once in your life, you have a 25 percent chance of being sterile the rest of you life. If you get this disease more than once, the chances are much greater that you will never be able to have children.

Statistics from Pam Stenzel’s, “Sex has a Price Tag.”

These and so many more diseases exist that sexually active teens, and adults alike, know and/or care little about.

“Most teens who are having sex are afraid of getting pregnant.” Pam says. “Girls come into my office for pregnancy testing, and when I tell a girl her test is negative, she gets a look of relief over her face, as though to say: “I’m off the hook. I’m not pregnant. Let me out of your office.” Wait a minute! Have you been tested for syphilis, gonorrhea, herpes, chlamydia, trichinoma, vulvadema, urethritis, hepatitis B, HPV or HIV? You have a four times greater chance of contracting a sexually-transmitted disease than you do of becoming pregnant.”

For nine years I’ve also had to tell hundreds of girls their tests were positive — “You’re pregnant.” Immediately they want an easy, painless way out. I have to look at them and say: “Sorry. Your choices at this point are bad, terrible, and worse. You had a good choice before you chose to have sex. Now all of your choices are going to carry painful lifelong consequences.” For more information from Pam Stenzel visit her website: here.

So God was right again. He is not just a cosmic kill-joy up high in the sky imposing meaningless rules upon us to spoil all our fun and to make us the laughing stock of society. Just like when we were children, the rules are there to keep us safe.

As for God, his way is perfect: the word of the LORD is tried: he is a buckler to all those that trust in him. Psalm 18:30

Does he know what is best for us? ummm…. yeah. God is God, and there is none other. He created us. He makes the rules– not us. We should not even NEED any other evidence to know that God’s way is best. We should not need to be convinced to obey God’s rules.

God’s plan is always best, anything else carries consequences, physically, emotionally, and spiritually. If you have made mistakes in the past, there is ALWAYS forgiveness in Christ. Those sins are covered by the blood, and are wiped from God’s memories. Unfortunately, the earthly consequences of those choices remain. Ask anyone who has contracted an STD in having sex before marriage… ask them if at the point they asked for forgiveness, they were miraculously healed of this STD. I dare to guess that they would shake their heads and say, “No.” Because, they had made their decision, and, now, they must live with the consequences. I am not here to condemn anyone for what has been done in the past. God is the judge and His forgiveness is sufficient.

Sex is sacred. It is not only a physical act of parts joining together. It is a spiritual union of two souls before God in a sacred covenant meant for marriage only, and is emblazoned on the mind and heart of both parties involved.

I believe that there are many Christians who feel that if God has forgiven that person for violating this law, we have an obligation to ignore it as well or that if you fall in love with someone who later tells you that they have not waited for marriage, then you HAVE to forgive and forget.

You may do that if that is your choice. However, let me make this clear, you are not bound by some spiritual obligation to give a person the precious gift of your purity on your wedding night if they have given their purity away to someone else. Let me explain why….

#1 -Once someone has contracted such a virus, they will have it for life… and so will their spouse!

No type of birth control protects against sexually transmitted diseases like Chlamydia, HPV, or herpes; and are no guarantee against AIDS. Hundreds of thousands of women are discovering that they cannot have children due to pelvic inflammatory disease caused by chlamydia. Pelvic inflammatory disease is, in fact, one of the causes of the declining birth rate. Again, 90% of those with Chlamydia have no symptoms.

HPV (human papilloma virus) leads to warts on one’s genitals that need to be burned off. Sometimes these warts can spread to one’s hands, and then it can be passed to any babies that one is caring for. However, the greatest risk is to women caused by HPV is cervical cancer.

Herpes also leads to embarrassing and painful sores. If a baby is delivered naturally during the mother’s first bout of herpes, the baby will be infected leading in many cases to either the babies death or brain damage.

Of the 30 sexually transmitted diseases, 26 damage women, the other 4 damage both.

HPV is the number one causal agent of cervical cancer. Last year, more women died in the US of cancer caused by HPV than died of Aids. It is killing more women than Aids. Girls who have had sex, need to be tested at least annually for HPV – a smear test. A negative smear test doesn’t mean that one doesn’t have the virus. It means that you don’t have cervical cancer. Men are not tested for it normally, for the simple reason that the test costs around $1,000. Yet people think if they “get tested,” and it is clear, they are fine. For boys, HPV’s are merely annoying – having to have warts burned off one’s genitals by chemicals or laser treatment.

I did not save my body and keep it from harm so that I could marry a man who would give me a life-threatening disease that I could possibly pass on to my children.

#2 There are not only physical consequences, but psychological and physiological.

What about women? Mark goes on to say, “When a woman experiences sex without commitment, she soon learns (falsely) that sex means little to nothing. Why? Because nothing happens as a result: no meaningful relationship ensues – he may never even call her or talk to her again. She has inaccurately learned that sex and commitment are two completely separate issues, which they are not. As for the physiological damage, science shows us that when a woman has sex with a man, a chemical called oxytocin is released into her system. Oxytocin is a neuro-peptide most commonly associated with pregnancy and breast-feeding. It seems to act as a human superglue and helps a woman bond with her infant. This chemical also helps a woman bond with her lover during sex. New scientific studies, however, suggest that if a woman has multiple sexual partners, this will lower her levels of oxytocin which in turn can inhibit her ability to bond to her husband. According to an article by Drs. John Diggs and Eric Keroack, “People who have misused their sexual faculty and become bonded to multiple persons will diminish the power of oxytocin to maintain a permanent bond with an individual.”
You can read more on that subject : Here.

Again, this sin, just like any other, was nailed to the cross of Jesus Christ. This is not an excuse to sin, but should be a motivator NOT to involve ourselves with the very acts that took Christ’s life. It is also a comfort to those who have already made mistakes in this area. Having made mistakes in this area does NOT make you un-marriable. There is more than enough mercy and grace in Jesus Christ to cover any and all sin if we repent and ask forgiveness. Praise God that He is so good not to hold any of our sin against us, and our souls have been redeemed by the blood. Minds can be renewed, and godly marriages can be built.

Mark Gungor warns, “Do not kid yourselves – renewing your minds may prove to be one of the most difficult things you have ever undertaken. Ask God for his help and make a definitive decision that you will no longer live under the lies of your lust-driven past and that you will be transformed by thinking differently! Trust me when I tell you that the payoff is amazing and worth the effort.”

However, the earthly consequences of sin remain, and those who have kept themselves pure have every right to expect the same standard in a marriage partner. If you choose to marry someone who has not saved their purity after considering the consequences, that choice is between you, God, and that person. Just as it is also your choice to not to pursue a lifetime relationship with someone who will not be a virgin on their wedding day.

If we do not set the standard of Jesus in Christian society, we will never get it. The standard by the world has been set, and the consensus is “It doesn’t matter.” God says, The Jesus Standard does matter. Jesus has set a standard for His children- “Save sex for inside God-ordained marriage.” HIS standard is the one that should be the “norm” in our Christian circles, not the standard of the world. If you have been wondering if it is really worth it to stay pure, the answer is clear. The Jesus Standard is clear, let’s live up to it, and encourage future generations to do the same.

Hey there, it’s me. I’m so glad you found my site. Feel free to browse around. I can’t guarantee everything on here is just for you, but it is my heart poured out on topics that are very close to me. So take what you need and maybe pass it on to a friend… we need each other in this crazy life and all the help we can get.